Yesterday, I found this: 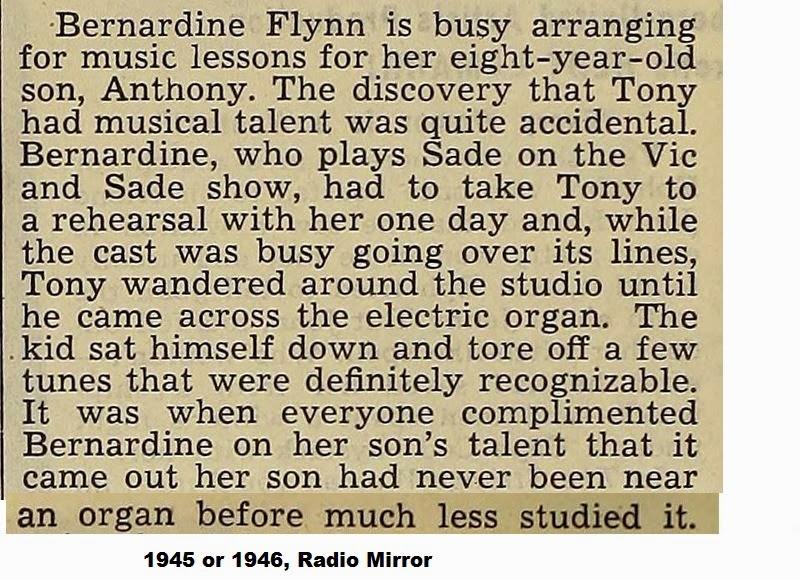 I contacted Mr. Doherty and he wrote back...

Thank you! I don't remember ever seeing this clip, but I do remember the occasion. My mother had a role in a story sequence on the Tom Mix afternoon serial. Of course to me at that age that was a far greater thing than V&S: listening to Tom Mix and the other shows for kids was part of my after-school agenda. So that day not only did I get to see Tom Mix  broadcast and meet the cast (Tom Mix was played by Curley Bradley and Leo Curley was his sidekick sheriff), I discovered that another favorite program, Captain Midnight, was done in the adjoining studio, so my joy was complete. Both shows were on the Mutual Network, from the WGN studios in the Tribune Tower.

Tom Mix was broadcast live twice, to accommodate different parts of the network. That was a fairly common practice back then, before magnetic tape was widely used. At one time V&S was broadcast both on NBC and CBS. I remember my mother telling me that the cast and Paul Rhymer has a standing reservation for a limo to get them from the Merchandise Mart to the Wrigley Building every day. At any rate, there was an interval of, I think, 45 minutes between the two Tom Mix broadcasts, with nothing going on. That's when I met the organist, who showed me how the Hammond organ worked. Then I was allowed to play it up until they began to get ready for the second broadcast.

That did lead to two years of piano lessons (I wasn't very diligent about practicing). Later on in junior high school I learned to play the tuba, sort of, and in high school switched to double bass. It was only after a hitch in the Navy and a couple of other things that I got to college, eventually as a music major, and got a degree in composition. I did study organ some at that time, but my professional focus became composing and conducting, the latter mostly choral. And that's where I am today. But that encounter with the Hammond organ was certainly a starting point.