Normal Americans - up to a point

If you have read the newspaper and magazine articles that I have found, especially those that were written during the show's original run, you will find a recurring theme: the writers often refer to the Gooks as being an average family - normal Americans, so to speak.

And this can be justified: Vic was a hard working, 8-4:30 white collar businessman.  Sade was domestic as anyone in radio history and was President of a sewing club.  Rush and Russell loved reading, sports, went to school and Sunday School, hated homework, etc.

The Gooks often played cards with other couples and went to the cinema.  They devoured a newspaper daily.  However, the Gooks didn't have a car.  Most of the people they knew seemed to have a car.  Not having a car somewhat prevented their freedom and restricted them from leaving their own yard... This is an important fact which I'll clue you in on later.

Outside of their daily routine, the Gooks' world became a bit strange.  Vic's two favorite activities were going to the lodge once a week (where he was the head muckity muck) and playing indoor horseshoes, which is what he did to get away from Sade when he got his feelings hurt.

Lodges used to be considered "normal" I suppose, especially during the Gook's run on radio (and the time shortly afterwards.)   I think in today's world, the kind of a lodge Vic attended might be looked on as a cult, not to mention pagan.  Some people don't really know the underpinnings of the Masons and those type of lodges but a further study of such might open your eyes.

Vic also enjoyed pitching horseshoes.  Now... you don't really think of pitching horseshoes as being abnormal, but really, how common was it?  Since the area the Gooks lived in was full of harsh winter weather, Vic played the sport indoors.  Okay, it's NOT crazy but it's pretty unconventional, don't you think?  Still, this activity occurred on his own street.  The Gooks' street was fairly 'normal.'

Sade's domestic normality ends when you consider the off-the-wall dishes she cooked: beef punkles, Hoover dip and other tasty items no one had ever heard of before the Gooks.  There's no mention of chicken dinners, apple pie or even sandwiches.  Vic loved limberschwartz cheese.

'Normal 'Sade was two-faced as a horse.  She was nice enough to someone's face (or on the phone) with her cheery talky-talk, but in the privacy of her own home, she'd get wound up and some might even call her "vicious" (at the very least, she could be tart and acidic.)

The two young boys were the most normal, until you realize that Rush enjoyed Gloria Golden pictures at the Bijou, even the mushy ones (although Russell probably enjoyed Golden pictures less than Rush.)  And neither never seemed to mind the mushy Lady Margaret in their books.  Both enjoyed going to the YMCA to watch the fat men sweat.  I can understand that enjoyment - but is this 'normal' behavior to want to do this?

Of course, once you leave the Gook yard (and especially the comforts of Virginia Avenue), you find their world has turned slightly askew.  Friends with normal names (Mr. and Mrs. Donahue, the Scotts, the Davis', Mis' Harris) suddenly turn into friends with abnormal names.  For instance, in the Thimble Club, the women that Sade interacted with on a daily (or near-daily) basis were 'normal' - but the less she was involved with a member, the weirder they seemed to get, whether it was just a weird name (Harry Antidisestablishmentarianistic Jackson, for example) or a weird story associated with them.

The same can be said with Vic's friends.  His fellow office workers were completely normal for the most part and most had normal names.  But this all begins to bend when you look at those friends who were also in his lodge - and the lodge in general.  Everything about his lodge is twisted.  All of his friends who do not work at the local Kitchenware plant either have eyebrow-raising names or do absurd things.

Rush and Russell's friends are just normal kids; though some may have strange names, they are kids and are prone to behaving like kids.  They do nutty things but kids do nutty things.

Of course I've left out Uncle Fletcher.  He was probably as rich as they come, yet he hung around with and behaved like a tramp.  A former teacher, he was a very, very smart man, yet he's forgetful and repeats himself and can be annoying.  Almost everyone he knows or knew either has a strange name or is nutty.  The only "normal" people in his life are his landlady, Mis' Keller (who completely changes in Series 3) and the fellows who run various the gas stations around town that he fills in for at lunch.

One might conclude that his good chum, B.B. Baugh, is normal and doesn't have an unusual name.  And I've concluded long ago that Baugh is a genius.  Of course, all genius' are a bit nuts and Baugh is no exception.

Yes, the Gooks were normal in their own yard.  But outside of the yard, anything can and did happen.

Vic and Sade fight over buying a car. Really?

From The Friends Of Billy Hudnut, By Thomas Swan, page 268:

The Pop Culture QD plays part of my audio book

The Pop Culture QD plays the Paul Rhymer chapter of my "book" and has nice things to say about The Crazy World of Vic and Sade, in their latest podcast.
Posted by Jimbo at 11:51 AM No comments:

Thanks to the American Radio Theater, we have access now to two new audio re-creations:

You can find a link to their re-creations at the bottom of each post.
Posted by Jimbo at 7:49 AM No comments:

Email ThisBlogThis!Share to TwitterShare to FacebookShare to Pinterest
Labels: re-creation

Here's a perfect example of a newspaper promo for their upcoming "daily little love story": 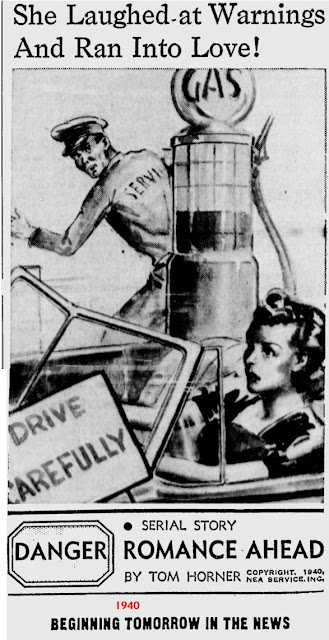 This is from a newspaper.  Most information concerning the show from newspapers and magazines is simply wrong.
Posted by Jimbo at 8:44 AM No comments:

Every other time I have seen this photo it had watermarks on it.  This one comes from a magazine and I swiped it from The Cobalt Club (yes, with permission.)
Posted by Jimbo at 8:03 AM No comments:

Email ThisBlogThis!Share to TwitterShare to FacebookShare to Pinterest
Labels: 1932

Vic and Sade at OTRRPedia

You probably won't find anything there new that isn't already on The Crazy World of Vic and Sade, but I have fully updated the Vic and Sade entry at OTRRPedia.

The one good thing is that cast member (including the various characters on the show from 1945-46) are cross-referenced with many (but not all) of the radio shows they were on during radio's golden age.  I and others are trying to fill in those gaps, and I am particularly concentrating on those shows "connected" with Vic and Sade.

Email ThisBlogThis!Share to TwitterShare to FacebookShare to Pinterest
Labels: OTRRPedia

I am at a bit of a standstill these days as I am caring for a sick relative.  I am also working on the left-hand side of the main blog (and going through the episodes again as well) and that's taking up time.  I am also recording audio for the news articles and that's taking up a great deal of my time.  And I have a secret project underway as well, which takes up a good deal of time.

To top it off, I'm at a spot where I feel "nothing more new can be found on the internet" in regards to Vic and Sade information.  We all know that's not true and I've probably thought this 10 times and every other time I was sure nothing more could be found, I find a bunch of stuff.  And I'm sure it will happen to me again.

I am hopefully going to be the owner of several scripts I don't have but that will just have to wait until I actually get them.  Anyway, when/if that ever happens, they will provide a lot of information that we don't have.

So, it's slow around here and likely to be until I find the time or run into something unexpected.  The entire month of June is likely to be very slow.  Just don't jump the ship on me.
Posted by Jimbo at 6:29 AM No comments:

According to this article (available only at the vicandsade.net website) Paul Rhymer often played handball in the evenings.
Posted by Jimbo at 6:22 AM No comments:

Email ThisBlogThis!Share to TwitterShare to FacebookShare to Pinterest
Labels: handball

Become Sade and write a letter to Bess!

Not too long ago, Sarah Cole mentioned to me that Vic and Sade lacks a letter from Sade to Bess.

When she told me, I thought it seemed out-of-place.  I thought she must have been wrong (but of course, she was right!)

And so it got me to thinking; what would a letter to Bess from Sade sound like?

I'm inviting you to write a letter to Bess, from Sade.  I've kicked the ball off and hope I provide you with some inspiration.
Posted by Jimbo at 1:51 PM No comments:

Have you heard this podcast?

I'm busy today moving some pages around in anticipation of adding 25 or more new categories to the left-hand side.

And while I am doing that, I am actually listening to myself on a podcast from a year ago which is actually pretty good, if I may say so myself.  If you haven't heard it before, I think you will enjoy my impressions, which come after listening to the  series the first time and lasts about 28 minutes.

Anyway, the left-hand side is changing a bit, so excuse the mess.
Posted by Jimbo at 6:37 AM No comments:

Would you be willing to read a Vic and Sade news article to audio for the visually impaired?

Would you be willing to read a Vic and Sade news article to audio for the visually impaired?  I have a couple of volunteers other than myself but I'm stuck with most of them.

I don't mind doing them but they are taking up quite a bit of my time.  I seem to have done about 25 or 26 so far.